Teachers of the North Ruimveldt Multilateral Secondary School (NRMSS) are now equipped to improve the lives of their charges following a timely donation of information technology equipment by members of the United States of America chapter of the Old Students Association yesterday afternoon.

Treasurer of the USAOSA, Karen Skinner, traveled from her USA base to complete the clearance process at the Customs Department moments before the handing over ceremony at the school’s Information Technology department, Mandela Avenue.

The items consisted of 21 computers, two dozen battery packs and one server. They will augment an initial set installed by the Ministry of Education. 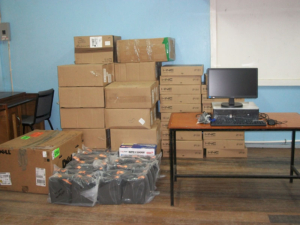 Headmistress of the school, Ms Diane Peters joined her deputy, Juliet Mattis and the head of the Information Technology, Michelle Sam, in receiving the gift. She expressed deep appreciation to her benefactors.

She said that in the past those children writing the Caribbean Secondary Education Council (CSEC) examinations were constrained by a paucity of computers and other learning implements. The students are now better equipped to learn, she added.

President of the local chapter of the Old Student Association, Denise Harris, was also loud in praise for the efforts of her colleagues of the overseas chapter. She also lauded the accomplishments of the students in the CSEC examinations that led to the school being declared the most improved junior secondary school based on its performance at those examinations.

She further said that the initiative marked the beginning of collaborative efforts of the local and overseas chapters and hinted at the rehabilitation of the field aback of the school in the near future.

President of the Parent-Teacher Association (PTA), Shiek Sadiq, also praised the efforts of the teaching staff and those of the USAOSA. He reminded the gathering of the torrid times experienced by students desirous of writing Information Technology.

The inadequacy of laptops and desktop machines presented numerous challenges for the students, he said. He urged the students to take care of the equipment even as he expressed deep gratitude to the members of the USAOSA.

The school may not have the clout and prestige of such institutions as Queen’s College and Bishops High School but through the hard work and commitment of its students, the North Ruimveldt Multilateral School has distinguished itself among the top learning institutions.

Though this achievement may seem insignificant to the uninitiated, it must be noted that the students of this institution have battled the vicissitudes which included lack of adequate learning implements plus an unfair stereotype. The gift is expected to change the status quo. (Michael Benjamin)